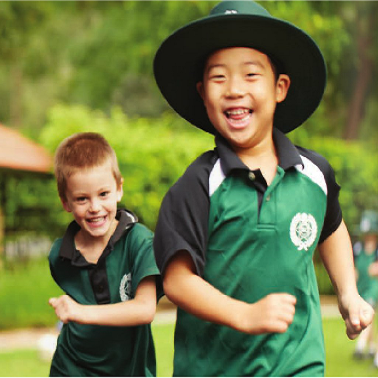 As I mentioned in my introductory post, right after I arrived in Australia, I started working at Brisbane Boys College, as a cleaner. Fortunately I was designated to clean the gym and its toilets, plus the Rowing Shed, about 3km away. It was an easy job, but I ended up fired after a few months due to my low cleaning standards.
But that job lead to my first football job as a coach: the Year 10B. I’ll talk about this one in another post. Right after that happened I got invited by BBCs football coordinator to run a football mini-clinics in the junior school. It was a scary perspective. Deal with 5 to 9 year olds in a very traditional school.
For australians it might be a bit hard to understand, but coming from Brazil, where the educational system is abandoned and the schools have poor infrastructure and almost non-existant sports programmes, landing in the heart of a rich centennary institution to teach a bit of my culture (the way brazilians play football) to kids was absolutely amazing.
The school is impressive. The area is tidy, well-organized and carefully planned to be an optimal educational facility. Right when I started I felt extremely good about being a part of their education. Waiting in the teacher’s room and mingling with the other teachers, who would say that 8 months before, when I was playing poker for a living?
The mini-clinics would run for 8 weeks, once a week. On Mondays I would be coaching Years 5-7 and on Wednesdays 8-9. It was an amazing opportunity in terms of knowledge of how humans function and learn, mentally and phisically. But as soon as I got in touch with those kids I got to remember something that broke my anxiety. Humans are all the same, no matter the nationality. Specially kids. Nothing is different. Obviously they are under much more strict education, which will result in much better humans later on, but the basic instincts and behaviors are all there.
But I regret what I did with team, in terms of football experience. They didn’t play any games until the fifth week. I focused  on fun games where they would working on basic skills, like juggling, passing, shooting and running with the ball, but in any football program for kids, on the top of any skills, there should be games for the most part. That’s how you build what’s more important than any skill. The love for the game. It was only a couple of months later that I learned the correct approach.
I also observed how some kids appear to be intrinsically more talented than others, what, considering their short existence leads to the conclusion that genetics play a big part in talent. It’s something that I also want to study more and write about, but if I had to summarize my thoughts on this matter, I would say that obviously the environment will be important in the development of a player, but the genes will provide the ideal machinery and circuits for the talent to happen. Individuals so much out of the curve like Messi and Ronaldo are not just product of hard work. There are millions of boys that will never come close to them, even working hard and being developed by good coaches.
All in all was a great experience. I got to speak in front of a large group of people for the first time (parents, kids and other teachers), which was challenging and not so good, but I survived and got my message through. I got to lead a team of other 4 ex-BBC students who would be “under” me coaching the groups. And I learned. From the pure technical point of view. Not a bad start!